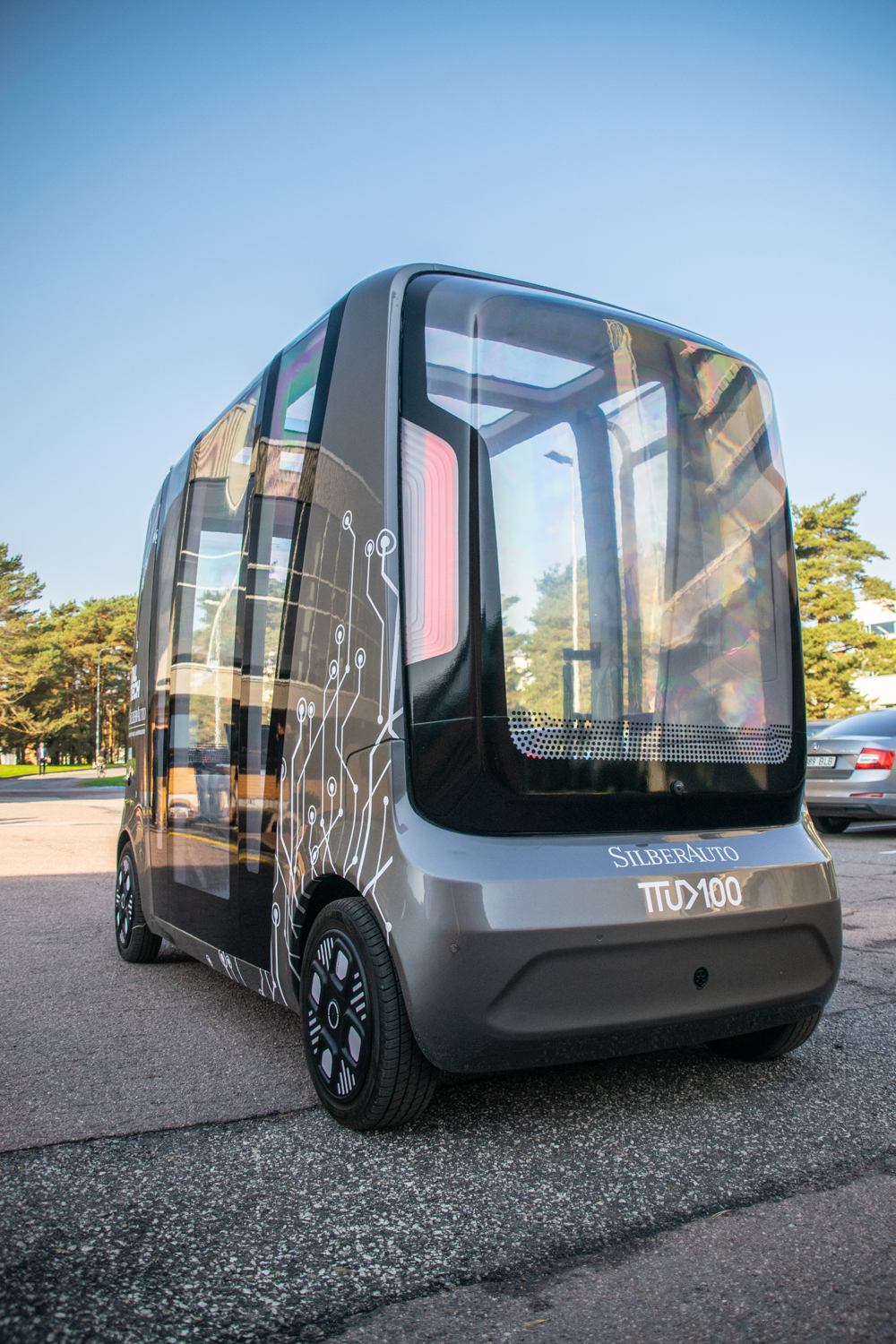 TalTech Iseauto is developed by TalTech students of the School of Information Technologies and the School of Engineering and Silberauto AS. ABB has also contributed as one of the project’s partners.

In the previous three sections we focused on developing the TalTech Iseauto, it is now time to take a look at what the final version of Iseauto currently looks like, which sensors are included in the bus, and what is it capable of.

Let’s start with the look of the bus, which is designed by Silberauto AS designer Sven Sellik. Iseauto is designed to be symmetrical, which makes it difficult to detect the rear and the front end of the bus by simply looking at it from the outside. The main color is dark gray, in addition, black and white colors are used. The height of the bus is 2.4 m, the length is 3.5 m and the width is 1.5 m and it weighs 1.1 tons. The following pictures give you some idea what a bus looks like.

Next, let’s look at where and how different sensors are located on the bus. First of all, the lidars, because their importance on the bus is difficult to overemphasize. We use Volodyne’s 3D lidars that create 360-degree 3D images of objects around the bus. They can be used for local positioning and object detection. Initially, it was planned to place one lidar on the roof at the front of the bus, and the other on the roof at the back of bus. But during the development, the results were achieved by placing two lidars in the front corners of the roof at a small angle (with an angle to the ground) and, in addition, one lidar was placed in the front of car a couple of hundred centimeters above the ground.

In addition to local positioning, the bus is able to position itself globally. For this purpose, the RTK-GNSS (Real Time Kinematic Global Navigation Satellite System) is placed on the bus, which is accurate to a few centimeters. Its main components are the GPS module and two antennas, one of which is positioned in front of the bus and the other at the rear. The use of two antennas gives you the opportunity to get the moving direction very quickly. The module itself was originally positioned at the back of bus above the engine, but because the model of RTK-GNSS used on Iseautol also has an IMU (inertial measurement unit), it needs to be repositioned because the high current moving in the engine produces a magnetic field, resulting in a magnetometer located in the IMU giving incorrect results. The IMU sensor includes three sensors – an accelerometer, a gyroscope and a magnetometer, or a compass, which in co-operation can output the bus trajectory. The picture below shows the antenna at the front of the bus.

The next important sensors are cameras. There is 5 cameras currently on the bus. Two cameras are looking to front of the bus – one on top and one on the bottom of the car. One camera looks behind the bus and two cameras to the sides (located in the front of the bus on the sides). The cameras can easily detect objects. Currently, Iseauto only identifies people and cars, but in the near future, for example, traffic signs and animals detection will also be added.

There are also 8 ultrasound sensors installed into the bus, which are designed to identify objects in the vicinity of the bus to a few meters. Four sensors were placed in front and four in back of the bus.

Now as we have described all of the senosors installed onto Iseauto, let’s look at what it can do.

Today’s main feature of Iseauto is that it can follow a given trajectory at a predetermined speed on a pre-mapped area. With the cameras, Iseauto can also identify people and vehicles in the area. The maximum permitted speed on the bus is 20 km / h. As of today, his main disadvantage is that it can’t identify objects on the trajectory lane and therefore, he also has no ability to cross over these objects, if necessary. However, these functionalities are in development. To ensure safety, there must be at least one operator during the bus ride to stop the bus from emergency brake button, if necessary. Emergency brake system was described in the previous section.

And finally, what’s the future of Iseauto? On November 14, 2018, two months after the first public demo, Jaak Aaviksoo, the TalTech Rector, and Väino Kaldoja, Chairman of the Silberauto AS Group, signed the agreement that will provide the basis for the continued development of Iseauto and the creation of a new Iseauto. The goal is to create an Iseauto2 that externally looks the same, but which would be both mechanically and technologically substantially optimized and designed to drive on the public streets. Its development should be completed by the summer of 2019. The first Iseauto, however, remains the development and training platform for TalTech students, and will be also the testbench for artificial intelligence and sensory testing for Iseauto2.

The Ministry of Education and Research and Estonian Research Council are supporting the completion of the blog.